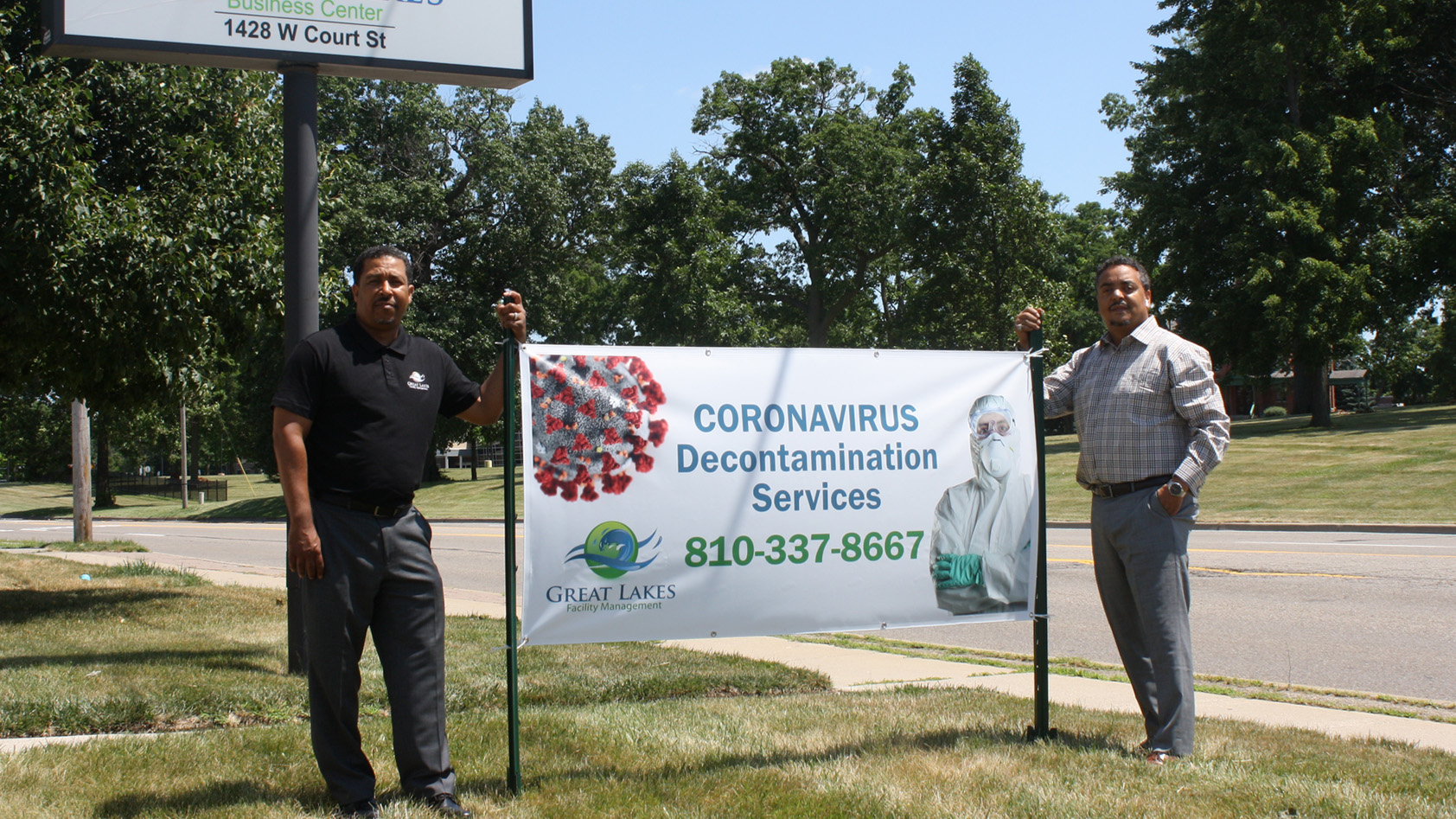 For L’Oreal and Steven Hartwell, owning the Dawn Donuts shop at Pasadena Avenue and Clio Road is about more than making a living – they’re also aiming to inspire nearby residents to follow their dreams.

And, in addition to counseling individual businesses as CEO of I’m Building Something, Flint native Ebonie Gipson is promoting patronage of all Black-owned businesses throughout the county – and even nationwide.

They are among the legion of Black business owners who are still working to make a difference in the community even as they cope with the fallout of the COVID-19 pandemic — which comes on top of barriers that analysts say Black entrepreneurs have traditionally faced.

The attitudes of local Black business leaders like the Hartwells, Rheaves and Gipson is not surprising to Janis Mueller, the Kettering University-based regional director of the I-69 Trade Corridor Small Business Development Center (SBDC).

“There’s an entrepreneurial spirit in Flint that I have not seen anywhere else,” said Mueller, who offers no-cost business training, one-on-one counseling and market research for area entrepreneurs.

Lack of finances, difficulty obtaining loans and insufficient mentors to help them navigate the business world are some of the hurdles Black business owners must overcome, said Jamaal Ewing, the statewide economic inclusion business consultant for the SBDC.

The same holds true for the coronavirus pandemic, Mueller said, noting that Black-owned operations face the same complexities as all businesses in dealing with the crisis, including increased sanitation costs, but also that COVID-19 has struck Black communities particularly hard from a health standpoint.

A recent study by the National Bureau of Economic Research determined that the pandemic also has had a disproportionate impact on Black-owned businesses. It found that the number of active business owners in the United States plummeted by 3.3 million or 22 percent from February to April. The drop in business owners was the largest on record, and losses were felt across nearly all industries and even for incorporated businesses. African American businesses, however, experienced a 41 percent drop, while Latino business owners fell by 32 percent and Asian business owners declined by 26 percent. 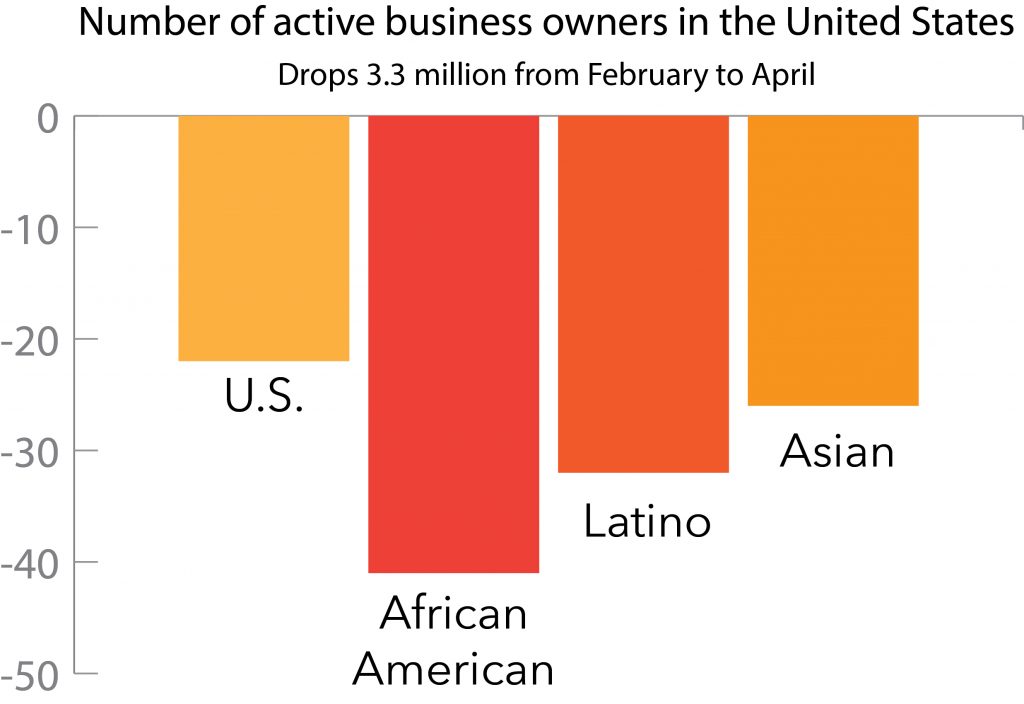 “The findings are alarming,” wrote report author Robert W. Fairlie. “The number of African-American business owners plummeted from 1.1 million in February 2020 to 640,000 in April. 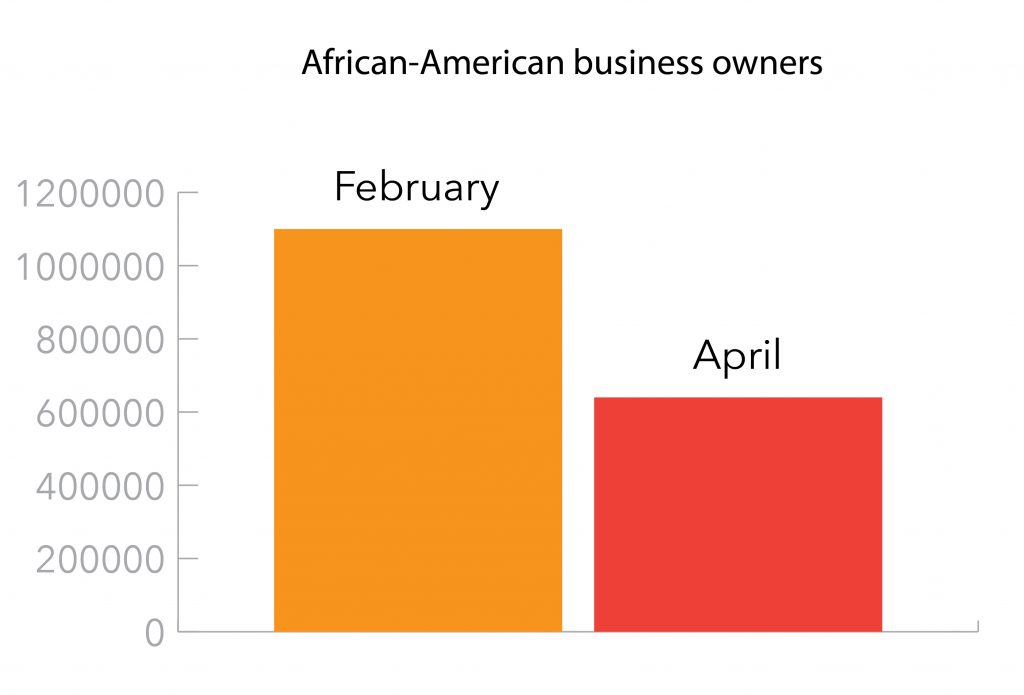 One factor was the percentage of Black business owners in essential industries — those that were allowed to remain open during governmental lockdown orders – is 66 percent, compared with the national percentage of 76 percent, he concluded. 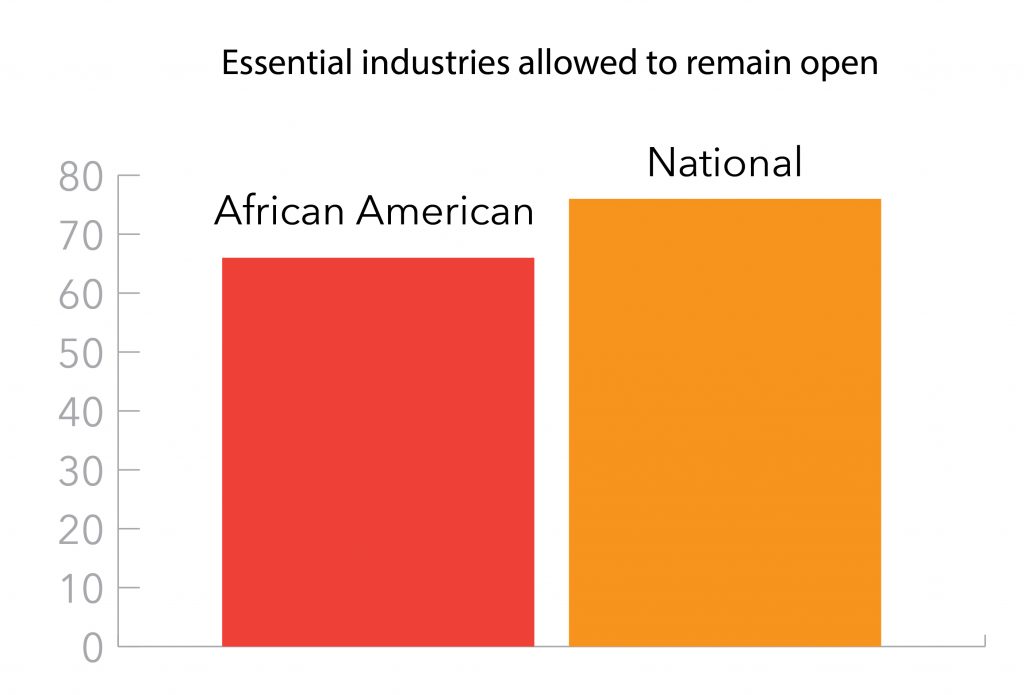 Gipson said that the pandemic hastened the closure of many businesses that weren’t on solid financial footing.

“It just sort of fast-forwarded the process,” she said. “But I think it’s important to understand that this is happening everywhere, but it impacts Black-owned businesses the most because you have certain inequities and disparities and barriers that are statistically proven and actually shown. So that when you add a pandemic to those barriers and issues that already exist, it’s a ticking time bomb.”

A program that the Flint & Genesee Chamber of Commerce unveiled this spring was designed to address that type of disparity.

Restart Flint & Genesee awarded grants to small businesses in Genesee County that suffered economic distress because of the COVID-19 pandemic. Consumers Energy Foundation donated $200,000 to the program, while the Charles Stewart Mott Foundation provided $262,500 and the Ruth Mott Foundation added $100,000 that was earmarked for Black-owned businesses.

The Restart Flint & Genesee program in early July awarded 75 Black-owned businesses with grants ranging from $1,000 to $5,000.

The funding was to help cover expenses associated with reopening a business under guidelines and requirements for social distancing and customer safety for businesses such as barbershops and hair salons/fitness, tattoo parlors, bars and restaurants, day care facilities and noncritical manufacturing operations.

Coronavirus has been a constant concern for the Hartwells since they bought Dawn Donuts. They signed papers for the purchase on March 23, one week after Gov. Gretchen Whitmer issued her first “Stay Home, Stay Safe” orders.

Then, about a week after buying the business, both of the Hartwells came down with the disease, preventing them from operating the shop until mid-April.

“We now have the added cost of sanitizing the business a few times a day, because people are in and out constantly,” L’Oreal Hartwell said, adding that hiring is also problematic with so many people temporarily earning around $900 a week with enhanced unemployed benefits.

“Right now that is actually a huge issue that we’re trying to overcome, although we try to be as competitive as possible and offer a safe environment with PPE,” she said.

Rheaves’ revenue took a hit as businesses shut down or moved to virtual operations, although some clients that were considered essential — such as Hurley Children’s Hospital and the Grand Blanc Township Police Department – were still in need of Great Lakes Facility Management’s services.

“Some accounts stayed open, but we did lose about 60 percent of our business during that time,” he said. “We’re starting to pick back up as our customers start to reopen.”

Rheaves also found an opportunity to establish high-touch disinfecting, fogging and electrostatic disinfecting for existing and new clients as they began to welcome back employees and customers.

“We took a hit, but we were able to somewhat salvage our bottom line by adding a niche to a preexisting service that helped us establish a new line of service,” he said.

For her part, Gipson — whose services include strategic planning, branding and social media management — helped clients develop more of an online presence as the pandemic struck.

Committed to the county

Rheaves, who founded his business 10 years ago after, among other duties, overseeing the environment services department at Ascension Providence Hospital in Novi, employs 32 people. He is resolute about keeping his headquarters in Flint even though the bulk of his business is performed in metro Detroit and he’s partnering with a Denver company to establish more of a national footprint.

“We have a commitment to the city,” he said. “We plan on staying in Flint no matter how successful we become.”

Part of that commitment involves mentoring others who are looking to go into business.

“I think I see myself as a role model,” Rheaves said. “There are younger Black entrepreneurs who reach out to me and seek some advice.

“First of all, I ask them what they are passionate about. Starting a business is not easy. You’re going to have many trials and tribulations, and you’ll definitely struggle. If you’re not passionate and dedicated about your business, then unfortunately you’ll be going back to work for someone else. But the feeling of owning a successful business is priceless.”

The Hartwells, who live in Freeland and also operate an insurance business and media company in Saginaw, have been heartened by the reception they’ve received in Flint.

“That’s literally what keeps us going,” L’Oreal Hartwell said. “It’s not about us right now. It’s about our community and showing hope. My husband says it all the time: ‘When you win, we all win.’ People have come into our doughnut shop and said, ‘We own this, it’s not y’all who own it.’ Everyone is taking ownership from the community, like it’s something they can call theirs.”

She noted the doughnut shop is a turnkey business that she and her husband could easily turn around and sell and move on to their next venture.

“But we’re staying put because we’ve put down roots here and the people are looking to us to succeed,” she said. “We definitely want to inspire people to go after their dream, to show them that we can make it in this community and you can do it too.”

According to U.S. Census Bureau data, there were 129 Black-owned businesses with workers on their payroll in Genesee County in 2017.

But the number of Black entrepreneurs in the community is certainly higher than any official count because many operate informally — such as by selling clothing to their friends or neighbors – to supplement their income, Mueller said.

She added that a goal of the Small Business Development Center and the roughly 40 other business-assistance entities in the community is to help them advance their fledgling operations to a more formal structure – and possibly even build a workforce.

“Not everybody is starting a business with a four-year degree in entrepreneurship and is able to create this perfect business,” she said, noting that challenges with financial management and literacy can limit access to much-needed startup capital. “Talk about personal credit, we can’t even begin to talk about business credit.”

She argues that lenders should consider inequities potential borrowers have had to contend with when developing criteria for loan approvals.

“It seems to me that we’re not digging deep enough to determine the ‘why,’ we’re just focused on the ‘what,’” she said. “My thing is we have to be more responsible in identifying what those barriers are. Where we can, we need to consider the barriers that exist. Otherwise, we have a great deal of loan funding that can’t be distributed because they don’t meet the qualifications.”

Gipson, a Flint native who started I’m Building Something about four years ago after spending 15 years in retail management and leadership development, is doing her part to support Black-owned businesses.

She is a founding member of Black Owned Buyout, a collective of women entrepreneurs who each month spotlight a local Black-owned business. For example, the 15-member group this summer staged an event at Dawn Donuts where it bought out the doughnut supply and gave it away to customers who stopped by the business – with the ultimate goal of helping build loyalty toward the operation.

“Racial injustice is an important topic right now, and we understand that protesting is great, but we also need an awareness of how to support Black-owned businesses with our dollars,” Gipson said.

“I think there are two components to it: Holding Black communities responsible for supporting one another and also creating awareness for everyone that we have to be more intentional about supporting Black-owned businesses because whether we like it or not, there are barriers and injustices. It’s proven by data.” 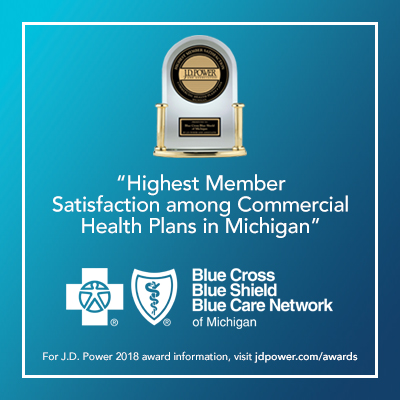 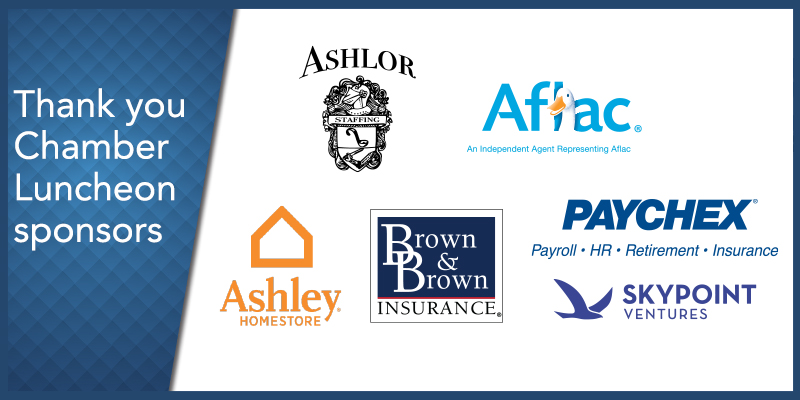